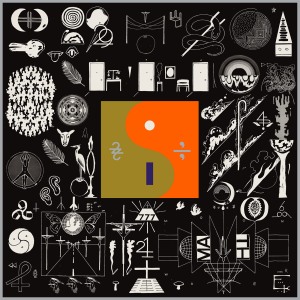 Bon Iver have released their latest album 22, A Million via listening parties in places all over the world. Well at least that’s what I think they are doing today via their Instagram account?

(Note: The album was played on a tape player surrounded by people who can barley hear and Bon Iver news papers handed out with no care for the environment)

Little did they know we’ve been listening away for the last month, or did they know? Has the world kept so quiet that the band managed to not realise and have it secretly slip under the radar while we all quietly listened away? Is Justin Vernon apart of the Illuminati? Does the Illuminati exist? So many unanswered questions.

But the album has been leaked for about a month now. Oh Well.. Let’s move on to the music anyway.

Firstly I feel this is a new direction for Bon Iver with more electronic elements. Are they The Killers? Only time will tell. This album has been conspired within conspiracy theories! where is the band? What have they done with them? Spending time with Kanye West will do this to music. Is it bad though? I’d have to go with no. Is it different in some tracks? Absolutely. Does the sounds of Bon Iver and the amazing harmony we know them for come through? Fucking absolutely! #Stanfford APTS is a perfect example of this bringing us the beauty that Bon Iver are known for and do best.

It should also be mentioned the track names are absolutely nuts but hey let’s go with something new with our direction?

Electronic elements come through strongly through tracks like  10 d E A T h b R E a s T ⚄ ⚄ Then there is the auto tuned ballad of  715 – CRΣΣKS. Which is exactly as it is described an Auto Tuned Ballad. Not bad if you feel the need to enjoy some auto tune in your life. But a but hit and miss also.

Bon Iver have taken their sound added a few more elements and created this album. It’s nice and cruisy I like the feel of the songs.

While we are asking questions and conspiracy theories though. Is there a Magic rule of three that someone has not mentioned to me about yet?? As Danny Browns album had three singles released before his new album dropped maybe that’s the new thing?  I like it though. To have sample tracks and enjoy parts of a album before it comes out is actually quite nice. With the stand out this time around being 22 (OVER S∞∞N) Which was a tease of the new elements and less plucking of strings.